Chapter XXVIII: A Trip to Elsewhere 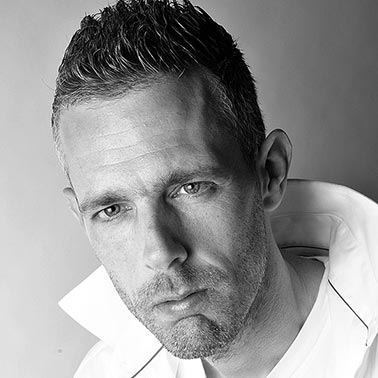 Congratulations on being Depthcore's first ever artist to be featured twice! Seeing as we missed out on actually interviewing you properly for your first feature, let's start with the basics; location, star signs etc...

My name is Bart van Leeuwen. I was born in Amsterdam on 27th of march 1974. My star sign is Aries and I currently live in the centre of Amsterdam.

I have always been on the look-out/had a keen eye for pretty things. It can be anything, the clothes I buy, a homemade-sticker on a Iamppost, a beautiful sky, anything. When I see something that I find pretty, it really makes my day. I've been searching a way to express myself for a long time since I was a kid. I discovered that it was art/design what I was looking for. Only thing is that I was kind of late with that discovery because I almost finished graphic school at that time but in a direction far off from design. The first time I came in touch with art/design was at the age of 12 when my father took me to one of his collegues being a graphic/graffity artist working on some decoration and backgrounds for a stageplay at that time. I was really fascinated by the way he sprayed those wooden boards and with such easiness. This is how I got the idea to go into Graphic school at first. Not really knowing what direction to take and not having a portfolio at all I took intermediar classes, learning a bit of every stage in graphic business. When I started working as an intern at several prepress companies in my last year of graphic school I had much freedom to do whatever I wanted behind those pretty Macs that decorated the whole office-floor. Photoshop got my attention immediately. I started to play with it and soon I mastered all the program basic skills. After my period as an intern I graduated from Graphic school and got a job similar to the one I had as an intern. The work that had to be done here was basically retouching photographs, which came in handy in order to expand my Photoshop skills. Working for about a year at that company I bought my own Mac and experimented a lot in my free time. By that time I saw Computer Arts at a local bookstore and recognized the 3D abstract art on the cover that I also saw on flyers and posters everywhere in Amsterdam which I admired so much. From that time on I wanted to make stuff like that. Unfortunately I soon figured out that without a 3D program it was pretty much impossible to make shizznit as such. I started to look for a different approach.

Looking back, how has your creative process changed since you were featured for Verve?

At the time Verve was released I looked a lot at other people's 3D abstract work. I tried to imitate their style with a different approach. Instead of using 3D programs, I tried to achieve the same result using only Photoshop by distorting cut-out parts of photographs to create a 'fake' render for me to use. This gave my works a different more original touch. In the years after I experimented a lot using this technique and created my own style. Things were getting very interesting with the introduction of Photoshop CS2 because of its new feature: the 'warp' tool. With that tool it was much easier for me to distort parts of images in a way I could've never imagined before. Nowadays I manipulate traditional photos and mix them with self made 'renders' creating surrealistic art. This way I can express myself way more in contradiction of abstract design/art.

Much of your artwork appears to now be influenced by political systems. Why is this so important to your new style of artwork? 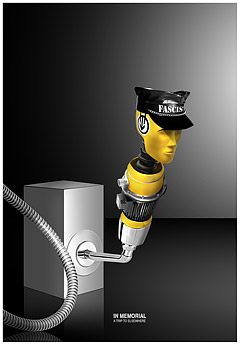 Well first of all, I'm fascinated by Germany. This fascination started a little while ago and has a lot to do with the nostalgic feelings from my early years when I was still a little boy. All of my family lived near the German border where I spent most of my time with famillie during vacations. Soon enough I could express myself better in German than in Dutch. Most Dutch people feel a little uncomfortable by hearing the German language. Beside the fact that we are neighbor country's some people feel that way because of their Posttraumatic Stress Disorder caused by World War II. Other people on the contrary are frustrated by the fact Germany took the World Cup Football back in 1974 beating the Dutch in the finals. My belligerent attitude towards people comes from the preconception people seem to have when seeing me in person. Towards those people I like to confirm their preconception a little more and let them fade away in their own imaginary little world. In my case there is no better way to confirm this by wearing a neo-nationalist German army cap (where I stitched the German flag on myself) and a SS panzer troop look-a-like jacket. Don't get me wrong, this jacket is in today's line of vision from a well known brand and has nothing to do with racism or fascism thoughts. Because of this attitude, that started at work about 5 years ago ("environment influences behavior" F.B.Skinner), I also started to read a lot about Germany and the Holocaust. That soon turned into a more broader spectrum: Totalitarianism. Slowly but surely all of this is becoming more of a lifestyle which I reflect on in my art: a combination of frustration, opinion, fear and fascination. It's all pretty personal and in direct contradiction of myself.

Politics aside, what other sources of inspiration crop up frequently in your art? Are there any authors or other artists that are particularly inspiring or influential?

Strangely enough I don't look much at other people's work nowadays. Of course I see a lot of art on the internet and such but that's nothing more than a 'wow' or a 'nicely done'. Unconsciously this has a certain effect of course just like everything else I see, do and hear every day. My real inspiration comes from the things I read indeed. I read Psychological stuff from; S.Freud, F.B.Skinner, Philosophical written books about Totalitarianism and religion etc. Politics, Religion, Philosophy and Psychology cover each other in many ways in my opinion, so from the one thing I get interested / inspired in / by the other.

Two years ago we all predicted that abstract artwork's future lay in photography. Now that the prediction has been realized, what direction do you see the genre and indeed digital art as a whole, progressing towards? 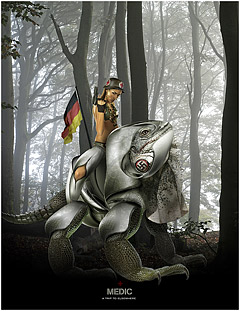 As for print I think it will be a mix of traditional and the more recent stuff. It will become less abstract but still interpretable in many ways.

Are there any trends or fads in design at the moment that you wish simply didn't exist?

If you could steal one other depthCORE member's skill sets and add it to your arsenal, who would you have and why?

David Mondou-Labbe because of his drawing skills and excellent and exclusive style, Jericó Santander for his insane photoshop skills, especially his latest stuff he did for Vivid.

Where do you see your artwork going from here? Will the more abstractive elements of your earlier work make a reappearance in conjunction with your more surrealistic style?

The point is I have a good imagination, and everytime I try to make an abstract object in Photoshop I start seeing something in it and end up using it as a concrete object in combination with something else. I'm definitely in the mood for putting more abstract into my works but have to figure out a way to do it in such a way that nobody could've ever imagined.

Thanks for taking the time Bart, and congratulations on your excellent work this pack!

Back to Top   \   Back to Interview List   \   View Chapter XXVIII: A Trip to Elsewhere Submissions   \   Submissions by Bart van Leeuwen