So, what's your name, just to let the folks out there know.

Where in the neck of the world do you live?

Geez, all you cool people live in Europe.... anyways... 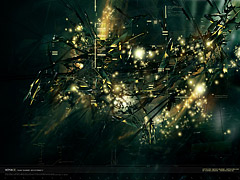 how old are you, and how long ago did you start doing digital graphics?

I'm 22. dunno exactly how long it is now, I started with my 386 computer and paint.. but maybe that doesn't count

What are your biggest sources of inspiration?

a little bit of everything actually

of course other designers and abstract artists

What is your taste of music?

I listen mostly to house and trance so that's my favorite types. but also some pop, rock, rnb

the only stuff I dont't like are hard metal and classic music... and I'm not a huge fan of hip hop either

too rickety and thrashy. It gets on my nerves

which artist (music, graphical, photographic, or skinner) do you admire most? and why?

that have to be Armin Van Buuren... his songs and remixes are the best. cant exactly say why.. they just have the right rhythm. I have liked em ever since I heard the first Armin tune

that's excellent, I would have to say he's my favorite artist in the music category.

the state of trance mixes are the best

but its all grey and cloudy

has been raining almost all day

It's pretty um, precipitative (if that's even a word) way up north there ehh? always a cloudy sky or is it pretty sunny most of the time?

have you ever met any member from depthCORE, I know there's a lot from Sweden :p

I dont't think anyone live in Stockholm except me

webdiod lives in Gothenburg, and I know a few others do too

I forgot which though

maybe ill take a design vacation down to em someday

hehe, sweet, be sure to record the moment for us

so, what are you wearing right now?

the kind that goes below your knee

and a tight white t-shirt

what's in your taskbar right now?

What games have you bought recently?

I dont't buy comp games anymore.. the last game I bought was like the diablo2 expansion

I only play counterstrike nowadays

I've never even played that game before everyone else has, but not me

haha.. then u have missed out on something

but I must warn u it's highly addictive

then I won'tgo near it

so, what would you like to say to everyone out there as we come to a close?

don't kill yourself if u don't succeed on the first try.. and there aren't any good tutorial pages for abstracts :C u have to learn it for yourself :P

and thx to all the ppl in depthcore

Back to Top   \   Back to Interview List   \   View Chapter VIII: Fantasy Submissions   \   Submissions by Thomas Larsson